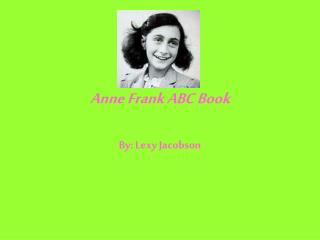 Anne Frank ABC Book. By: Lexy Jacobson. A: Annex. Anne Frank lived in the secret Annex. B: Brave. The Frank family was brave for living in the Annex and having to leave their home. C: Cat. A cat lived in the Annex. D: Death Camps. Many people were sent to death camps and were killed.

ABCs of Adolf Hitler - . by cori krick. d is for

Anne Frank Quiz #6 - . who does anne decide to spend lots of time with because she is so very bored and lonely? a . her

Elbert Frank Cox - . by: abby schreader. background . born in evansville, indiana in 1895 father was a teacher attended a