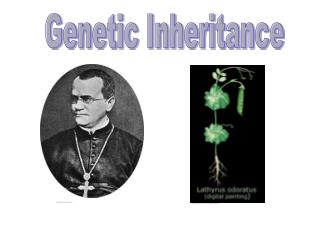 http://fi.wikipedia.org/wiki/Gregor_Mendel. http://www.personal.psu.edu/staff/d/c/dcw1/graphics/pea_plant.jpg. Genetic Inheritance. Father of Modern Genetics. The first person to trace the characteristics of successive generations of a living thing.

Inheritance and Polymorphism - . this section is not required material!!!!. since we are ahead in lecture, i’m delving

An Introduction to Development and Inheritance - . development gradual modification of anatomical structures and

Genetic Testing - . lecture 8. overview of genetic testing. genetic diseases often depend on the genotype of an

Inheritance and Polymorphism - . this section is not required material!!!!. a note about inheritance… it’s not

Principles of Clinical Cytogenetics - . clinical cytogenetics is the study of chromosomes, their structure and their

Unit 7 - The history, structure, function, and applications of dna the history of dna it took a lot of different