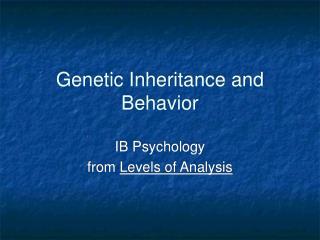 Genetic Inheritance and Behavior. IB Psychology from Levels of Analysis. To what extent does genetic inheritance influence behavior?. We want there to be a genetic link to behavior because it would be an easy explanation for things like homosexuality, criminality, and addiction. GENETIC INHERITANCE - . lesson objectives. at the end of this lesson you should be able to give a definition for a gamete

GENETIC INHERITANCE - . learning outcomes. at the end of this topic you should be able to give a definition for a gamete

Genetic Inheritance - Gregor mendel. gregor mendel was an austrian monk who was interested in botanyattended university

Genetic Inheritance - . conception the union of sperm and ovum create a zygote the zygote contains a complete set of 46

Other forms of Genetic Inheritance - . genes. genes are parts of chromosomes that carry information most organisms

Inheritance of Traits: Pedigrees and Genetic Disorders - . pedigree definition. pedigree: a family history that shows how

Genetic Analysis of Behavior - . goals and assumptions. goal: begin to dissect circuitry that controls larval (and

Genetic Influences on Behavior - . nature. v. nurture. the nature argument (is sometimes compelling). this guy will