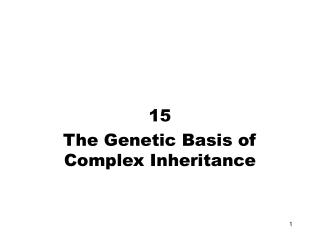 15 The Genetic Basis of Complex Inheritance 15 The Genetic Basis of Complex Inheritance

CHAPTER 6_1 INHERITANCE AND COMPOSITION - . in this chapter, you will: learn about inheritance learn about derived and

The Inheritance of Complex Traits - . chapter 5. differences among brothers and sisters is due to both genetic and

How was DNA determined to be the genetic (hereditary / information carrying) material of life? - Chapter 16 - molecular

Chapter 13 Inheritance - . chapter goals. to learn about inheritance to understand how to inherit and override superclass

Heredity : the passing of traits from parent to offspring - Traits are controlled by genes , so what is genetics ?