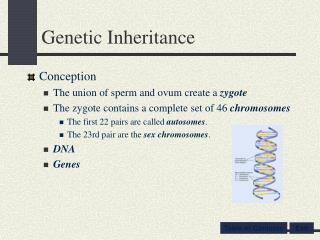 Genetic Inheritance. Conception The union of sperm and ovum create a zygote The zygote contains a complete set of 46 chromosomes The first 22 pairs are called autosomes . The 23rd pair are the sex chromosomes . DNA Genes. Genetic Principles . Genes Genotype. Phenotype