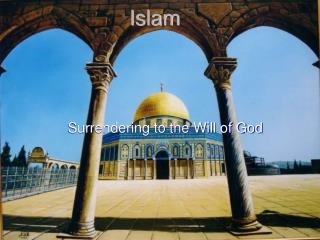 Islam. Surrendering to the Will of God. Quiz #1 Islam. 1. The Arabic word ‘Islam’ derives from the same root as which Hebrew word? 2. Islam means what? 3. Why do Muslims believe all of creation is Muslim? 4. Why do Muslims consider Jesus, Moses, and Abraham genuine Muslims?