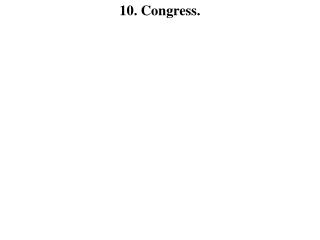 10. Congress. The National Legislature. The House of Representatives. The Senate. 1. term. term. Each _______ lasts for two years. session. session. period of time during which, each year, Congress assembles and conducts business. adjourn. adjourn. suspends until the next session. Chapter 10: Congress Section 1 - . key terms. bicameral : a legislature made up of two houses term : the two-year

Congress - . the national legislature. why does the constitution divide power between the two houses of congress? what is

Congress - . chapter 12. the representatives and senators. the job salary of $145,100 with retirement benefits office

CONGRESS - . chapter 7 o’connor and sabato american government: continuity and change. congress. in this chapter we

Congress - . if progress is the advancement of society, what is congress?. don’t forget to review the worksheet that i