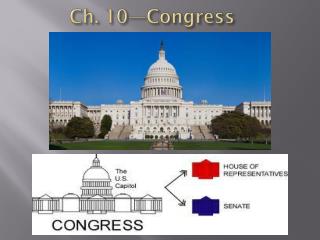 Ch. 10—Congress. Why a “bicameral” Congress?. Historical Reasons The British Parliament consisted of 2 houses since the 1300s Most colonial assemblies and state legislatures were bicameral Practical Reasons Chevron – Adding Step 0 - . when a court reviews an agency’s construction of a statute which it administers has

1.In the 1930s, Congress attempted to avoid the situations that led to United States involvement - In world war i by (1)

Answer this question - . should congress reflect the will of the people? or should they pay attention to their own points