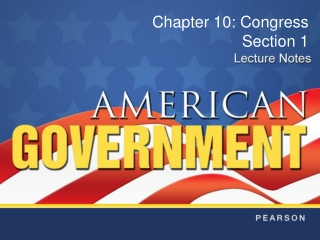 Houses and Members of Congress - . section 2 chapter 5. focus questions. how do the houses of congress differ in their

Congress Takes Charge - . chapter 17, section 2. reports sent to congress that confederate flags were being sold in the

FrontPage : Why is the commerce power a significant power of Congress - . the last word: ol 6.2 due friday. testing the