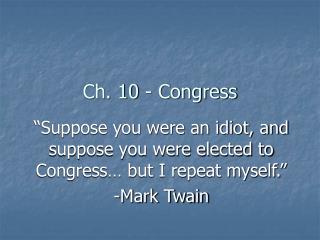 Ch. 10 - Congress. “Suppose you were an idiot, and suppose you were elected to Congress… but I repeat myself.” -Mark Twain. Back to Chapter 1 for a sec…. What kind of democracy do we live in? So the people rule, but they don’t make public policy Who does make it?. Bicameral Congress.