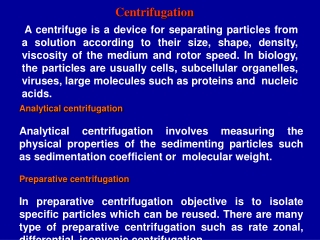 Centrifugation. A centrifuge is a device for separating particles from a solution according to their size, shape, density, viscosity of the medium and rotor speed. In biology, the particles are usually cells, subcellular organelles, viruses, large molecules such as proteins and nucleic acids. DNA Replication - . needed only when a cell is about to divide s phase of cell cycle prior to mitosis or meiosis. no

Centrifugation - . a centrifuge is a useful device for chemical separation and a good example of circular motion. the

Figure 7.0 Fluorescent stain of cell - . how do we learn about cell structure and function?. immunofluorescence

Separation processes - general - . mechanical separations e.g. filtration of a solid from a suspension in a liquid,