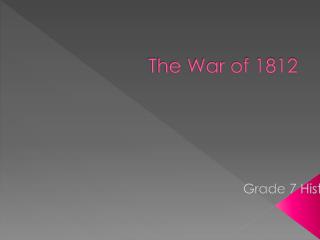 The War of 1812. Grade 7 History. Intro. The war had both European and North America roots Happened along the border between the US and British North America Lasted over 2 years Canadian, Americans and First Nations suffered loss of property and life

The Young Republic - . 1816-1848. “era of good feelings”. a strong sense of national pride swept the country after

Effects of the War of 1812 - . battle of new orleans: what happened at the battle and what was its outcome? battle of