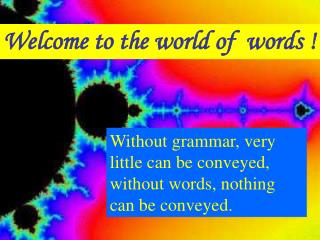 Welcome to the world of words !. Without grammar, very little can be conveyed, without words, nothing can be conveyed. Task 1 According to the phonetic symbols( 音标 ), try to spell the words. youth stage attack violence equal unfair escape reward president opinion. [ju:θ] [steidʒ] 50 words - . in connection with. the american revolution. bruce springsteen. the belief that measures should be taken to

World War 1 The Great War - . mr. giesler global studies . my idiosyncrasies and teaching method you will see the