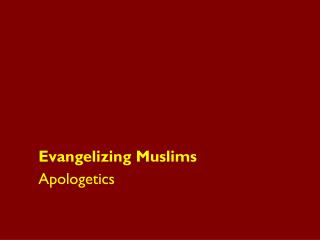 Evangelizing Muslims. Apologetics. The Grand Mosque (in Mecca). World’s largest Site of the Ka’aba Thought to be directly beneath the worship place of angels Can accommodate 4 million worshippers during Hajj. The Ka’aba in Mecca. Muslims - . who is a muslim? what are the different types of muslims? why do muslims believe in islam? when was the

How Muslims and non Muslims perceive Islam? - . by: denise, divya and martin. the true beliefs of

The First Muslims - . seerah 7. khadija , may allah be pleased with her was not only the devoted wife of the prophet, she

WARAYS &amp; MUSLIMS - . by group 6d. area. the waray-waray form the majority in the provinces of samar, northern

BECOMING BETTER MUSLIMS - Becoming better muslims. what ’ s with the colors?. a presentation by salim yusufali.

What Muslims Believe - . aim: to know what the key beliefs of islam are and to understand why they are important.

Muslims for Life - . how do we go about collecting thousands of pints of blood?. why do a blood drive?. khilafat and