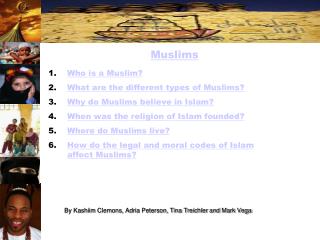 Muslims. Who is a Muslim? What are the different types of Muslims? Why do Muslims believe in Islam? When was the religion of Islam founded? Where do Muslims live? How do the legal and moral codes of Islam affect Muslims? By Kashiim Clemons, Adria Peterson, Tina Treichler and Mark Vega. Islamic Culture and Art - . islam is considered the fastest growing religion in the world. there are approximately 1.3

Al Qaeda - 2010 most muslims are not terrorists, but almost all terrorists today are muslims. “i will cast terror into

Islam - . understanding islam. why should we study the religion of islam? there are over 1 billion muslims in the world.