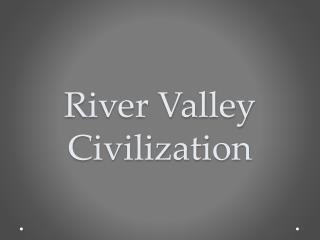 Aim: How did the ancient Egyptians use the Nile River to develop a successful river civilization? - . the nile river

Review! 2-4-13 - . describe the geography of ancient i ndia what were the two capitals of the i ndus river valley

The Indus Valley Civilization - . what evidence have archaeologists found of a highly developed civilization in the indus

Indus Valley Civilization - . built along the banks of the river system because of the huge mountains north and west of

River Valley Civilizations - . unit 1 review. river valley civilizations. which of these is a characteristic of

Civilization in the Huang He Valley - . china today has the most people of any nation on earth: over 1.2 billion. china

Essential Question : - What is the difference between a “river valley civilization” &amp; an “empire”?

Indus Valley River Civilization Artifacts - . what is an artifact ?. an artifact is an object made by a human, typically

A RIVER VALLEY CIVILIZATION - . geography of india. india is considered a “ subcontinent ” because of its size. it is