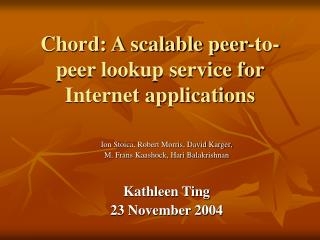 ptp - . soo-bae kim 4/09/02 isdl@snu. what is peer to peer?. communication without server advantage no single point of

Standing Up to Peer Pressure - . what is peer pressure?. social pressure by members of one's peer group to take a certain

Sensor Networks &amp; Applications - . partly based on the book wireless sensor networks by zhao and guibas.