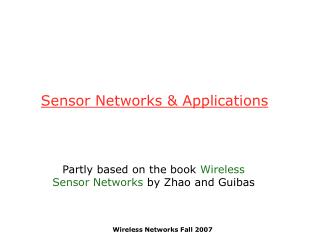 Sensor Networks &amp; Applications - . partly based on the book wireless sensor networks by zhao and guibas.

Sensor Networks - . by k. subrahmanya sreshti (05it6004). under the guidance of prof. shamik sural school of information