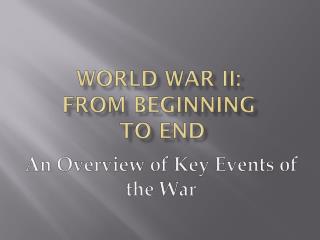 World WAR II: from Beginning to End. An Overview of Key Events of the War. Benito Mussolini. ITALY 27-29 OCTOBER 1922

World War One: The Beginning - . world war i (1914-1918) was caused by competition among industrial nations in europe and

Espionage During the Cold War - . after the end of world war ii the world was split into two; east and west. this marked

The Beginning of World War II - . the gathering storm the invasion of poland the miracle at dunkirk operation catapult.

The Second World War and the End Of European Domination - . or… europe really screwed up, so why n ot l et america

The Legacy of World War II - . the cold war. europe after wwii. “what is europe now? a rubble heap, a charnel house, a