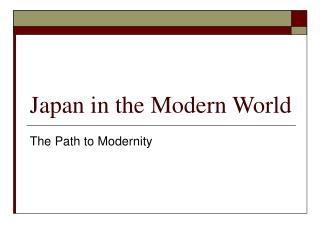 Japan in the Modern World. The Path to Modernity. Tokugawa Isolation and Commodore Perry. Tokugawa Japan: What was it like?. Over 200 years of peace Both Daimyo and samurai become impoverished Samurai became bureaucrats Other samurai became merchants—beginning of market economy Medicine in the Modern World Continued… - . by mr day downloaded from schoolhistory.co.uk. lesson objectives. to

Will You Become Your Own Nation? - . nationalism and politics under globalization. authority in the modern world. the

2002 FIFA World Cup in South Korea/Japan - . by: al-muthanna al-ani 7b. history of the world cup. the fifa world cup

Chapter Five - . how did the physical geography of japan affect its worldview ? in what ways did japan isolate itself

Section 4: World Power - Teddy and the world 1901 tr becomes pres when mckinley shot likes to get involved in world

III. RISE OF MODERN JAPAN A. Japan Responds to Foreign Pressure - By end of 19 th century japan emerging as modern

Japan Study Guide Review - . 1.explain the change that occurred in japan during the tokugawa shogunate. pg 270-271. 200