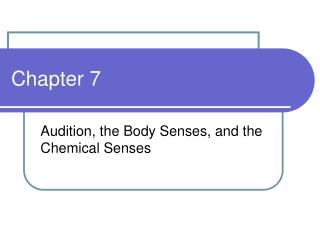 Chapter 7. Audition, the Body Senses, and the Chemical Senses. Audition. The stimulus Sounds vary in their: Pitch – a perceptual dimension of sound; corresponds to their fundamental frequency Loudness – corresponds to intensity Timbre – corresponds to complexity Anatomy of the ear