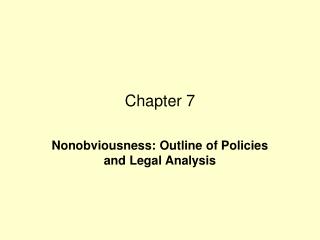 Chapter 7. Nonobviousness: Outline of Policies and Legal Analysis. Basic Conundrum. Courts and commentators agree with near uniformity that the nonobviousness doctrine is designed to screen out patents on “trivial” inventions. Why is the doctrine necessary?