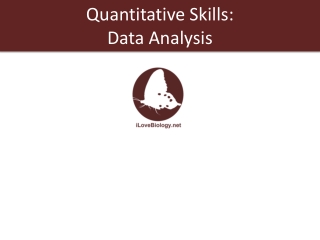 Quantitative Skills: Data Analysis. Data analysis is one of the first steps toward determining whether an observed pattern has validity. Data analysis also helps distinguish among multiple working hypotheses. Skills and Techniques - . 5 th september 2011 by the end of the week you will be able to describe your analysis of