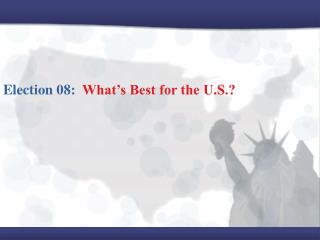 Election 08: What’s Best for the U.S.?. Consumer Taxes. Keep the current capital gains and income tax structures. (The Bush Plan) Double the dependent exemptions, benefitting big families of all incomes. Give tax credits for those with qualifying health care.

Trump and Clinton: 50 days to go - The candidates hit the trail 50 days before the

Election of 1960 - . nixon versus kennedy. background: dwight eisenhower had just finished up 8 years of serving as

The 2008 Presidential Election: Obama versus McCain: Who votes for whom? - U.s. history and geography high school.