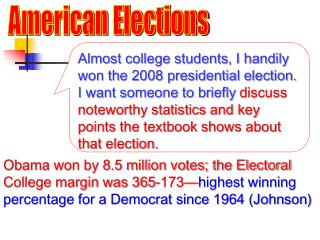 American Elections. Almost college students, I handily won the 2008 presidential election. I want someone to briefly discuss noteworthy statistics and key points the textbook shows about that election. Obama won by 8.5 million votes; the Electoral College margin was 365-173— highest winning AMERICAN ELECTIONS - . election day: n ovember , 2012. plan. i - a basic understanding of us elections a- american

American Elections - . almost college students, i handily won the 2008 presidential election. i want someone to

Elections – Which Elections? - . the election processes: the openstack foundation has 3 technical leadership of ptl’s

Elections - . chapter 7. why are elections important?. elections are an essential part of democracy. they allow

Elections - . essential questions: why do we have elections? is our election system perfect? or are there reforms to

Elections - . “if voting could change anything, they’d make it illegal” -emma goldman, anarchist. how do we

Elections - . what is the easiest way for citizens to influence the government?. who can vote?. in order to vote, you

Elections - . all you ever wanted to know and more!. benefits of elections. give the government legitimacy actually fill

Elections - . purposes of elections. to elect a member of parliament to represent the constituency as a whole or as

Elections - . civics unit 5. political parties. lesson 1. questions. answer the following questions on your own sheet of