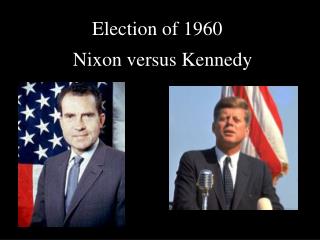 Election of 1960. Nixon versus Kennedy. Background: Dwight Eisenhower had just finished up 8 years of serving as President. During his time in office, the country did very well economically. The Candidates: DEMOCRATS--John F. Kennedy Father was involved in politics