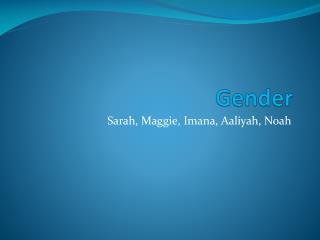 Gender. Sarah, Maggie , Imana , Aaliyah , Noah. Fun Facts. Only 11% of American engineers, 25% of American doctors, and some 29% of country’s lawyers and judges are women Almost one in six women age 75 or older live in poverty