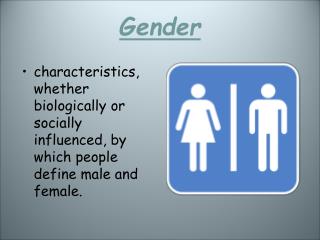 Gender. characteristics, whether biologically or socially influenced, by which people define male and female. Gender Role I'm Glad I'm a Boy--. A set of expected behaviours for males and females List some of the “normal” gender roles. What gender role is she breaking?. Gender Identity.