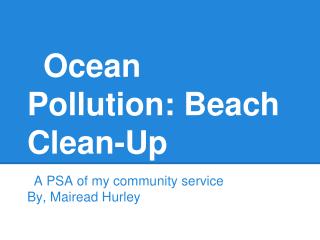 Ocean Pollution: Beach Clean-Up. A PSA of my community service By, Mairead Hurley. What is Ocean Pollution and why is it a problem?.

Marine Pollution - . objectives: explain how marine debris enters the ocean ecosystem and the impact it has on the marine

OCEAN POLLUTION - . how pollution gets into the oceans. at least 85% of ocean pollution comes from activities on the land Beach Cleaning Up - Organizer: cast-la. volunteers wanted. beach cleaning up. saturday, july 17 from 9:30am to 12:00pm

Oil spills affect marine life - . by:lulwa-al-zaini. what is an oil

MARINE POLLUTION - . introduction. pollution in ocean is a major problem that is affecting the ocean and the rest of the

Water and Water Pollution - . chapter 11. key concepts. why is water so important? how much water is available? how much

Marine Pollution - The introduction by man, directly, or indirectly, of substances or energy to the marine environment

Ocean Pollution - . our family. our community of 20 families live in a coastal area and are very poor. they depend of