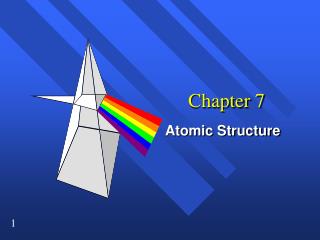 Chapter 7. Atomic Structure. Light. Made up of electromagnetic radiation Waves of electric and magnetic fields at right angles to each other. Parts of a wave. Wavelength. λ. Frequency = number of cycles in one second Measured in hertz 1 hertz = 1 cycle/second. Frequency = ν.