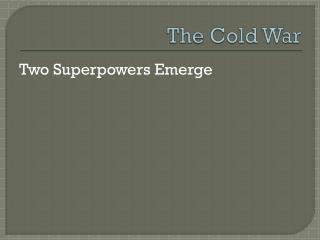 Chp 20.1 Kennedy and the Cold War - . quickwrite what are the qualities of effective leaders?. how can a leader motivate

The Cold War - . the division of germany, the berlin blockade and airlift, nato and the warsaw pact. quick review – how

THE COLD WAR - . what do you think the phrase “cold war” means? how do you think it is different from a “hot”

Aim : What were the causes of the Cold War? - . objectives. student will be able to identify the events leading up to the

The Origins and Legacy of The Cold War: - . origins of cold war - bernard baruch coins the term &quot; cold war