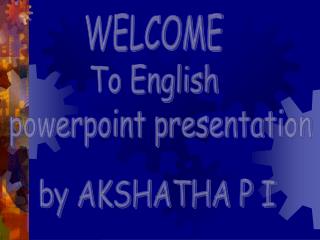 WELCOME. To English . powerpoint presentation . by AKSHATHA P I. INDEX. Kinds of nouns 2. Gender 3. Number 4. Case. KINDS OF NOUNS. A Noun is a word used as the name of the person, place or thing. NOTE: The word thing is used to mean anything that we can think of.