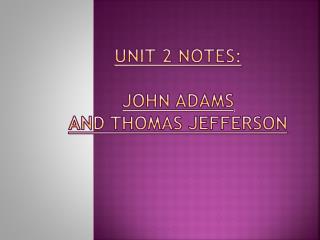 UNIT 2 NOTES: john adams AND THOMAS JEFFERSON. JOHN ADAMS. The biggest issue Adams will deal with during his term will be foreign relations These are continuing issues from Washington’s presidency Problems with Britain were obvious, but they also began to drift towards war with France.

APUSH – December 1 - . objectives: to continue to further your understanding of the themes and symbols within

Hamilton vs. Jefferson - . after washington became president, two groups began to argue about what the new nation should

Thomas Jefferson was elected the third president of the U.S. in 1800 - Thomas jefferson and the decision to purchase the

Thomas Jefferson and Alexander Hamilton - . an comprehensive and insightful look at the differing natures of two of

Life After Washington Another War Election of 1796 A. First openly contested election - B. federalists nominate john

Declaration of the Rights of Man - . articles: 1. men are born free and remain free and equal in rights. social