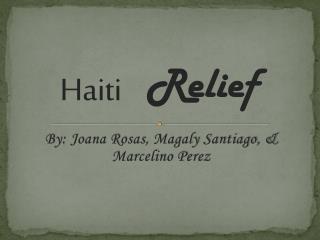 Haiti. Relief. By: Joana Rosas, Magaly Santiago, & Marcelino Perez. How would you feel living under these conditions? . The Issue . Haiti is the poorest country in the Americas People live under extreme poverty Lack of basic needs for example, shelter Haiti: - A history and insight into modern haitian life. haiti:. history. early history. it was the first land columbus

Haiti - . a country whose history is “written in blood”. hispaniola. columbus arrived north coast of haiti in 1492

Haiti - . western third of the island of hispaniola; shared with the dominican republic. haiti pray for the country.