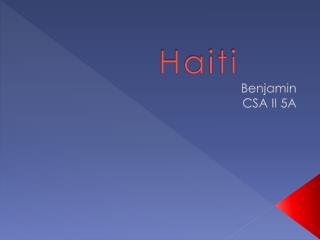 Haiti. Benjamin CSA II 5A. Country Facts . Capital & Largest City . The capital of Haiti and the largest city is Port-au-Prince. . Haiti’s Area. The area of the country of Haiti is 27,750 square km. . Climate .