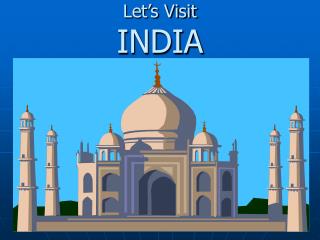 Let’s Visit INDIA. Where in the world is India?. India is in Southern Asia. India is the 7 th largest country in the world. The capital of India is New Delhi. India is about 1/3 the size of the United States. Hinduism is the most popular religion. What is India like?. Goa Holidays - 28 Must Visit Tourist Places in Goa - Goa, the beach capital of india, has several beautiful places to

Investing in India India as an investment destination - . 29 february 2012. why india. india- compared to the globe.

India - . to find india on a world map: locate asia. india is a large country in southern asia. india has a long “

The British Take Over India - . “quick” review. question 1 who did the british defeat at the battle of plessey to