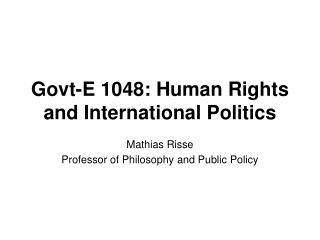 Scotland’s National Action Plan for Human Rights - . what could it mean for you? the gathering, wednesday 29 february

Aim: How can we compare the women of India and Pakistan? Do Now: What are human rights?

“Globalization and Human Rights: It’s a Small World after All” - . understanding the connections between the

Intellectual Property and Human Rights: Myths and Reality on the Access to ARVs medicines.

Human Rights Based Approach Gender Mainstreaming Conflict Prevention (etc.) - . how can we be more strategic in