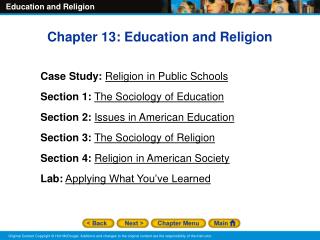 SPECIAL EDUCATION DISABILITIES AND IT S IMPLICATIONS - Introduction brown v. board of education mandated schools to

Private Education and Religion in the United States - . provenzo chapter 7. private or independent education. 10% of u.s.

LEGAL ISSUES IN ASSESSMENT - . chapter two. chapter objectives. the basic problems with respect to discrimination in

THE HISTORY OF AMERICAN EDUCATION - . teachers, schools, and society a brief introduction to education educational reform

Chapter 4 Section 1 - . the elements of culture. culture is the total of knowledge , attitudes, and behaviors shared by