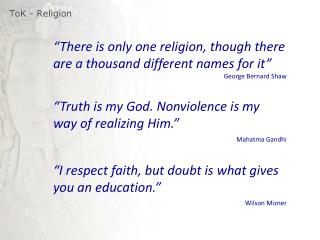 ToK - Religion. “There is only one religion, though there are a thousand different names for it” George Bernard Shaw “Truth is my God. Nonviolence is my way of realizing Him.” Mahatma Gandhi “I respect faith, but doubt is what gives you an education.”

RELIGION - . vocabulary according to the kbat. monotheism. animism.

ToK: Science I - . the scientific method. what is science and what isn’t science?. boiling an egg predicting the

What is Religion? - . it is easier to identify the common features than define it 6 dimensions of religion (by niniam

WHAT IS RELIGION? - . a set of beliefs in an ultimate reality a set of practices used to express those beliefs it is a

Religion - . what is religion?. religion is a unified system of beliefs, rituals, and practices that typically involve a

Religion - . definition: belief in, worship of, or obedience to a supernatural power considered to have control of human

JAINISM - . jain society of metropolitan chicago bartlett, il. what is religion?. “what holds one from falling from