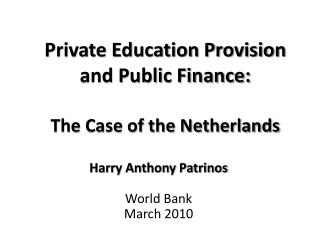 Private Education Provision and Public Finance: The Case of the Netherlands

Private Education Provision and Public Finance: The Case of the Netherlands

The Role of the Public and Private Sector in Transport Infrastructure : PPP Options - Seminar: public private