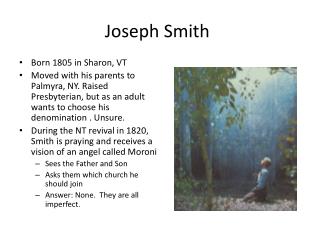 Joseph Smith. Born 1805 in Sharon, VT Moved with his parents to Palmyra, NY. Raised Presbyterian, but as an adult wants to choose his denomination . Unsure. D uring the NT revival in 1820, Smith is praying and receives a vision of an angel called Moroni Sees the Father and Son