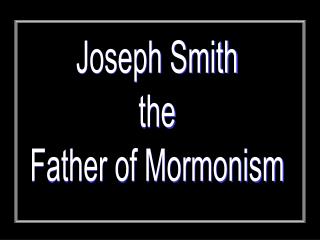 Joseph Smith the Father of Mormonism

Joseph Smith the Father of Mormonism. Joseph Smith. (1805-1844). http://www.mormons.org/images/leaders/js_portrait_green.jpg. In order to understand Mormonism one must know some basic information about who Joseph Smith was and how he brought Mormonism into existence.

Joseph Smith the Father of Mormonism

Enos – Words of Mormon - . the short books of enos, jarom, and omni contain the record of nearly one third of the book

Doctrine and Covenants 20 - . the book of mormon. another testament of jesus christ. read doctrine and covenants 20:1.

A Study in Mormonism - . the history of mormonism. on the 21 st of september, 1823, joseph smith jr. claimed that he was

Mormonism Elohim – The Exalted Man - . introduction the mormon view of god is one of the more radical departures from

Mormon Beliefs About Salvation - . salvation according to

Mormonism Facts - . commonly known as the church of jesus christ of latter-day saints claim that their church, as

THE CULTS 2 - . the mormons. church of jesus christ of latter day saints. the deception of mormonism. study outline.

MORMONISM AND ITS CONFLICT WITH THE BIBLE - . dr. jobe martin biblical discipleship ministries