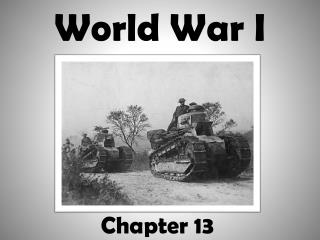 World War I. Chapter 13. Vocabulary Chapter 13. 1.militarism 2.Triple Alliance 3.nationalism 4.Triple Entente 5. Kaiser Wilhelm II. Critical Thinking. 1.How did imperialism and militarism work together to promote war? 2. How did nationalism contribute to the unrest in the Balkans?.