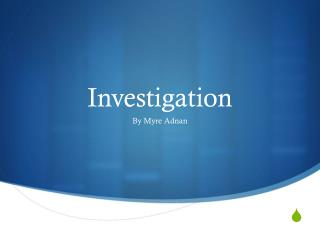 Investigation . By Myre Adnan. PROBLEM STATEMENT AND DESIGN BRIEF. Problem Statement. The problem is that an alarm is not always enough to wake people up. INVESTIGATION - . dig deeper in to your image. my environment – my favorite bench. my first envision. let’s

Investigation - Simulation of 3-d groundwater flow and seawater intrusion along the mediterranean coast of turkey.

INVESTIGATION - . change in parameters – m and b. investigation. in this investigation, we will see how changes to the

Historical Investigation - . your job as students. the difference between math and history. history is a science. the

INCIDENT INVESTIGATION - . what’s your favorite hobby?. the aim of the investigation. exonerate individuals or