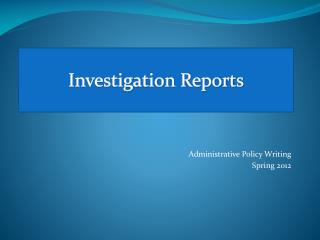 Fire Investigations - . the purpose of a fire investigation is to determine: what was the origin of the fire? what was Harassment Incident Report Form - . this form is to be used as the first report of an alleged harassment incident. the

Writing a formal Scientific report for an investigation - . title: an accurate, concise description of the project

WHAT TO EXPECT IN AN INTERNAL AUDIT OR INVESTIGATION - . an overview of internal audit and investigative processes for