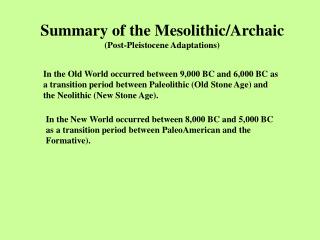 Summary of the Mesolithic/Archaic (Post-Pleistocene Adaptations). In the Old World occurred between 9,000 BC and 6,000 BC as a transition period between Paleolithic (Old Stone Age) and the Neolithic (New Stone Age).

Adaptations to Terrestrial and Aquatic Environments - . some adaptations of plants for life on land osmotic adaptations

ADAPTATIONS - . adaptations. every organism has features that allow it to survive in its own particular habitat these

6K Animal Adaptations - . 3 minimum or 4 maximum slides on the adaptations of your chosen animal. make the presentation

What did the Archaic Indians hunt with? - . what is the atlatl. name what the archaic indians and the fremont ate. .

Indecipherability of Archaic Languages - . by: ashley williamson b4 2/19/14. what do these terms mean?.

Adaptations and Biomes - . obj. 3a, 3e, &amp; 3h. adaptations to an environment. every organism has a variety of

Adaptations - . an adaptation (or adaptive feature ) is an inherited feature of an organism that enables it to survive