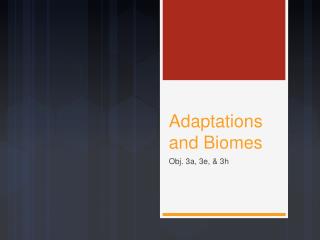 Adaptations and Biomes. Obj. 3a, 3e, & 3h. Adaptations to an Environment. Every organism has a variety of adaptations that are suited to its specific living conditions An adaptation is a trait that an organism has inherited that helps it survive and reproduce in their habitat Adaptations &amp; Biomes - . levels of organization in an organism. chemicals make up cells… which make tissues…

BIOMES AND ECOSYSTEMS - . what is a biome? . a biome is a group of land ecosystems with similar climates and organisms.

Ecosystems and Biomes - . biotic and abiotic components. level of organization of

Ecosystems and Biomes - . energy flow in ecosystems. where do you get your food?. producers – an organism that can make

Biomes and Ecosystems - . biomes. climate zones. biome. a biome is a large region with plants and animals that are able

Soils and Biomes - . outline. turn in your permission forms for the interview. pay attention to the timer – it let

Communities and Biomes - . community. community : a collection of several interacting populations that inhabit a common

Landforms and Biomes - . volcano. an opening in the earth's crust where molten lava, ash, and gases exit. floodplain. an

Climate and Biomes - . what is a biome?. remember that an ecosystem consists of all the biotic and abiotic factors

Ecosystems and Biomes - . topic g.2. energy flow. highest energy is in the producers who get their energy from the sun

2.4 Biomes - . what is a biome?. a biome is a collection of ecosystems that share similar climates (do not stop a

Adaptations in the Marine Biome - . adaptations to the marine biome. over time, organisms in the oceans have developed