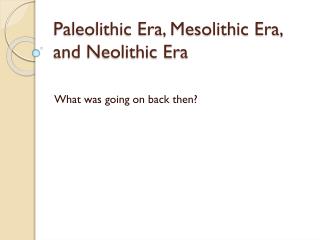 Paleolithic Era, Mesolithic Era, and Neolithic Era. What was going on back then?. What we are about to discuss is EVOLUTION THEORY. It may conflict with your religious beliefs of CREATIONISM—that a supreme being (God) created man and all the earth’s creatures.

Paleolithic vs. Neolithic - . b.c. vs. flintstones. what do we remember about the flintstones?. questions to think

Paleolithic Age vs. Neolithic Age - . which era would you have preferred to raise a family in?. do now: what do you

Paleolithic and Neolithic Eras - . theories of the first humans. humans first developed about 2 million years ago in

The Mesolithic Period in Europe - . chapter 13. climatic changes in europe in the early postglacial period. around 9,500

The Neolithic Revolution - . a.k.a. stop chasing the food. what was life like before the neolithic revolution?.

The Neolithic Revolution - . prehistory and hominids. prehistory is the time period before writing . . mary and louis

Human Origins During the Paleolithic and Neolithic Age - . objective: students will be able to explain the differences