Weaponry and Tools of the Archaic Age - PowerPoint PPT Presentation 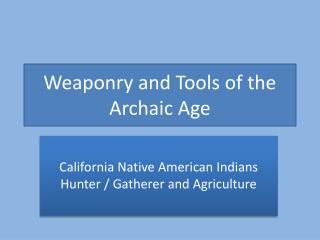 Weaponry and Tools of the Archaic Age Weaponry and Tools of the Archaic Age

Evolution of Pottery Part 2 - . the iron age about 900 bc to 1300 bc *bronze had previously been used to make tools

Georgia’s Early People - . prehistoric cultures of the southeast. what is prehistory?. hunting a mastodon.

Unit 2: From Exploration Through Independence - . georgia history. unit 2. why were the native people in north america

The Four Prehistoric Indian Periods - . archaeologists dig for artifacts that tell us about people of the past. artifacts

Rise of Civilization - . unit 1. group task. “if stranded on a desert island what tools would you need to survive?”

Tools Used by Indian Tribes - . tools used with corn. hoe made from a scapula or shoulder blade of bison . mussel shell

Greek Weapons and Tactics - . the hoplite. named for the hoplon the shield he carries was private citizen and responsible