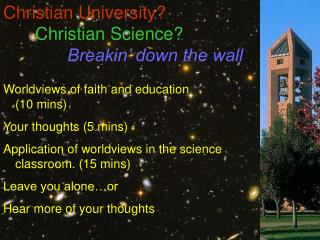 Christian University? Christian Science? Breakin’ down the wall. Worldviews of faith and education (10 mins) Your thoughts (5 mins) Application of worldviews in the science classroom. (15 mins) Leave you alone…or Hear more of your thoughts.

Contemporary Christian Praise and Worship 10:00am - . alas! and did my savior bleed and did my sovereign die?. would he

Christian Lifestyles - . spring 2013. vocation . in order to figure out our vocation, we first must have self-awareness

Jesus and Christian Apologetics - . i who was jesus of nazareth? ii the miracles of jesus john oakes foster stanback. you

Christian Ethics - . in a postmodern world. ethics versus morality. ethics = ethos = “stall”. what is normative,